Planes, trains and automobiles (and trucks) transport people and goods to and from the Alleghany Highlands. The region is strategically positioned midway along the eastern seaboard on Interstate-64 between Interstates-77 and -81, convenient to major U.S. markets. More than 40 percent of the U.S. population and in excess of 200,000 manufacturers are located within a 600 mile radius.

There are 10 interstate exits on I-64 as it moves through the Alleghany Highlands. The region is midway between Washington, DC and Charlotte, NC, and is almost equidistant among New York City, Atlanta and Indianapolis.

The Virginia TradePort – International Port of Entry #1412 and Foreign Trade Zone #238 located at the New River Valley Airport in Dublin – is less than two hours drive from the Alleghany Highlands. The region is located within the FTZ’s 90-mile radius, which means area businesses have an easy way to process, warehouse and distribute goods entering and/or leaving the United States.

The Port of Virginia is 262 miles to the east on Interstate-64. More than 25 percent of the containerized cargo exported through the port originates in the Alleghany Highlands.

The Alleghany Highlands is served by both passenger and freight rail lines. The region’s rail heritage runs deep. Amtrak’s Clifton Forge station offers passenger service between New York and Chicago three days a week via the Cardinal and Hoosier lines.

CSX provides freight service to business in the Alleghany Highlands, offering 21,000 miles of track, access to 70 ports and nationwide transloading and distribution services. The region also is served by the Buckingham Branch Railroad, a family owned short-line railroad.

Two commercial airports are within easy driving distance from the Alleghany Highlands: Roanoke Regional Airport (ROA), an hour southeast in Roanoke and Greenbrier Valley Airport (LWB), 43 minutes to the west in Lewisburg, VA. 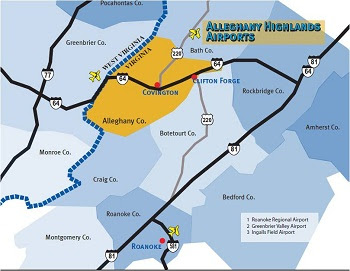 Greenbrier Valley Airport is served by Delta and United (formerly Continental) and offers flights to:

General aviation service is available at Ingalls Field in Hot Springs – about a half hour drive – and at both Roanoke Regional and Greenbrier Valley.

Start your business today in the Alleghany Highlands of Virginia

GET SOCIAL WITH THE AHEDC